Are safety razors really worth the hype?

Safety razors are touted as more economical, better for the environment, and giving a better shave. But do they live up to the hype or are they just something kind of crappy that hipsters enjoy, like PBR? Let a life-long multi-blade razor user tell you the scoop.

The Schick Quattro razor I used for years was fine, but I hated spending so much for “fine.” Refills packs cost about $15, but dulled after maybe three uses. I gave up shaving my thighs because of in-grown hairs. The places I did shave ended up itching like crazy the next day. (Apparently smooth armpits are sexy, but scratching them in public is not.) The shave itself only lasted about a day and half. I was over it, and ready to see if safety razors deserved all that praise.

To start with, I just bought the cheapest, best-reviewed set that I could, which is the Bigfoot Shaves travel pack. It was on sale, and cost less than a four-cartridge refill pack and came with the razor, five blades, and a carrying case. The big complaints in the reviews were that the handle is too small and the blades too dull, which worked for me. I have tiny lady hands and duller blades are better for beginners. 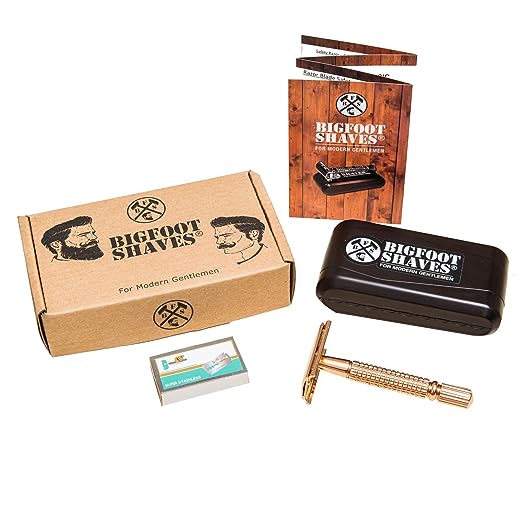 I took a hot bath to soften up all the hair, and got shaving. It was the longest bath of my life. You need to follow a shaving pattern with safety razors. First you go with the grain of the hair, then perpendicular to the grain, then against the grain, all the while using short, light strokes at about a 30-degree angle from your skin. The razor is weighted, so you’re supposed to use the weight of the razor, not pressure from your hand.

For my legs, I just went with the grain then against it since my leg hair is relatively sparse. Yes, I did shave my bikini area; yes, it was nerve wracking; no, I did not destroy my crotchal area. Shaving my legs, armpits, and bikini area took a really long time, and a lot of shaving cream. I probably could’ve used less shave cream, but I’m still used to the Reddi-wip application method due to all the itchy, burny past experiences.

This instructional video shows the right way to do things, which I may or may not have followed.

A few things impressed me about the safety razor. Most cartridge razors clog up almost immediately unless you’re one of those ladies in shaving commercials who shave pre-shaved legs. The safety razor didn’t clog at all. It rinsed clean quickly and easily. It didn’t even get clogged with my head hair that clogs vacuums. It cut through thick, longish body hair comfortably and effectively. (I might’ve gone several weeks letting everything go au naturale.) The shave is a bit closer than the Schick Quattro, but I suspect a sharper blade or a 17-blade, laser-enhanced cartridge razor would do better.

Probably my biggest issue was the learning curve. I’ll probably get faster once I’m more comfortable and accustomed to the process. It’s called a safety razor, but I was worried about accidentally opening a major artery and dying a stupid shaving-related death. That’s not going to happen; the razors are designed so that doesn’t happen. Worst-case scenario you get a bad nick, and that didn’t happen, not even when I had to shave my right armpit with my left hand. So, what’s the verdict?

Is the shave better?

Potentially. I’ll probably need to shop around to find the right fit, but the shave is at least comparable. The nice thing is that you don’t need to spend a whole lot to figure out which blades work the best for since there are various sampler packs you can buy for cheap. That said, for people with coordination issues, arthritis, or shaking hands, it may be easier to stick with fat-handled cartridge razors with swiveling heads.

Is it less expensive?

The blades certainly are. You can buy a 100 pack of blades for less than $13. Even the fancy ones are less than $7 for ten. That’s even cheaper than shave clubs. But people seem to get into shaving accoutrements like badger-hair brushes, various soaps and oils, trying different razors and blades, etc. I’m sure you get a better shave with this stuff, but it’ll add up.

Are they better for the environment?

Generally, yes. Even if your community can’t recycle the blades, they’re much lighter and produce less waste than cartridges or disposables. No matter if you recycle or landfill them, the blades should go in a blade bin so they can be effectively processed and no one gets hurt. What would be even better for the environment, though, would be to forego shaving all together.

Let’s get back to me, though. Since the shave was fine, but not remarkably close, the stubble returned after the usual one and half days. However, the itchiness and in-grown hair problems were significantly reduced, so much so that I’ll be sticking with my new safety razor. I’ll never love shaving, but it’s nice to have a better, cheaper method.