How much is too much to drink?

What do you think of when you think of binge drinking? A frat party where someone leaves in an ambulance? An alcoholic losing control and ruining a family holiday? Running out of red Solo cups?

How about finishing a bottle of wine over the course of an evening? According to the CDC, that would be five beverages on a single occasion, which constitutes binge drinking. (Contrary to how wine is usually served, a bottle of wine contains five five-ounce servings.)

Most people are able to understand what dangerously drunk looks like, how it happened, and what the repercussions are. But according to the medical community, you can still drink too much without binging. In fact, you may not even get drunk and still drink too much.

Look, I’m not going to stand on high from Mt. I-Know-Better-Than-You to tell you what to do with your life. It’s not like I’ve never overindulged and said and did stupid things. But alcohol is a cultural touchstone for celebration, sadness, bonding, and relaxing, and it’s relatively easy for normal productive people to have more than the recommended amount.

First of all, the recommended amount is more or less zero. Doctors don’t recommend that you pick up drinking for the potential health benefits like lowering the risk of developing diabetes or lowering the risk of dying of heart disease. They’re a lot more likely to tell you to walk briskly for 30 minutes than to crack open a beer, especially if you’re 15, pregnant, or 15 and pregnant.

According to the Mayo Clinic, moderate drinking is up to one drink a day for women and up to two drinks a day for men under 65. They define heavy drinking as over seven drinks a week or over three drinks any one day for women and over 14 drinks a week or over four drinks any one day for men under 65. Sadly, one drink isn’t three fingers of Glenlivet either.

This graphic shows what a standard drink size is for different types of alcohol. 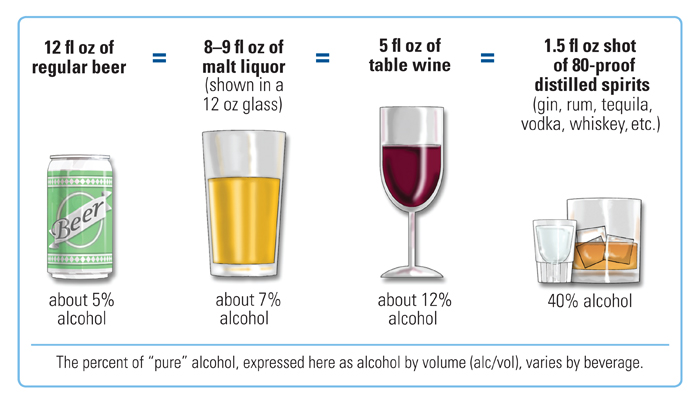 As you can see, the standard size doesn’t necessarily reflect typical servings: one pint of beer is larger than a standard drink; a fourth of a bottle of wine is larger; and cocktail strength varies a lot.

Okay, so let’s say your drinking isn’t affecting your job, relationships, or productivity, but you’re still having more than is recommended. What’s the big deal? You feel fine.

When it comes to health, nothing is guaranteed. You’re not going to live forever because you never drink, and your face isn’t going to melt like in Raiders of the Lost Ark because you had two mimosas at brunch and two glasses of wine at dinner. However, the chances that health problems could arise increase when you drink heavily, even if you’re not dealing with injuries caused by being stumble drunk.

If you want all the gory details, check out the National Institute of Alcohol Abuse and Alcoholism’s full breakdown of the ways overuse of alcohol can damage your health. But the highlights are:

It’s worth noting that most of these health issues occur over time from cumulative damage, and can be ameliorated by stopping drinking.

(Except for a compromised immune system. If you go to a rager, get smashed, and play beer pong, you’re probably going to get sick.)

If you want to cut down your drinking to moderate levels, start with examining why you’re drinking as much as you are. Is it because your work requires a lot of social functions that include alcohol? Are you trying to deal with stress? Is it how you relax enough to be social? Or maybe most of your socializing revolves around alcohol.

Once you know why you’re over doing it, come up with a plan to handle it. Before you go out, plan what you’re going to drink and when, e.g. no pre-gaming, having a drink special once you’re at a bar, and then maybe another halfway through the night. If you’re using alcohol to medicate stress or anxiety, try looking into therapy to see if you can find non-medical approaches to manage them or if you need actual medicine to help.

As for drinking as a way to be social, I know when I’m buzzed I feel like I’m funnier, more attractive, and more interesting, but having been on the receiving end of drunken interactions, I know that I’m probably just louder and more annoying. It’ll be hard to rein in your drinking when all your friends are knocking them back, but your liver and dignity will thank you.