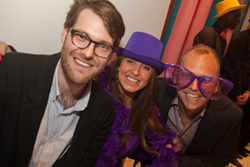 Much like Charlie, kids from low-income families can rise to their full potential with access to resources and opportunities. First Book is thrilled to join Penguin Young Readers Group in this anniversary celebration that will put new books into the hands.

2014 marks a phenomenal fifty years since Roald Dahl’s best-loved tale, CHARLIE AND THE CHOCOLATE FACTORY, was first published. The story of Charlie Bucket, the five Golden Tickets, the devilish Oompa-Loompas and the amazing Mr. Willy Wonka has become firmly embedded in our culture, having (twice) been reimagined for the cinema, as an opera and, in 2013, as a hit London musical. Conservative estimates suggest the original book has sold over 20 million copies worldwide; it is currently available in 55 languages.

To celebrate this milestone, Penguin Young Readers Group, in partnership with Dylan’s Candy Bar, the world-famous candy emporium, and First Book, a nonprofit social enterprise that provides books for children from low-income families, is launching a year-long international celebration. Some of the events include:

Yesterday, April 9, 2014 at P.S. 8 Luis Belliard School in Washington Heights, Luke Kelly, the grandson of Roald Dahl and Managing Director of the Roald Dahl literary estate, kicked-off this amazing partnership, reading to about forty lucky 2nd and 3rd graders at the school. First Book and Penguin representatives were also on hand to read to students, who each received new copies of Charlie and the Chocolate Factory.

Last night at Dylan’s Candy Shop, members of Penguin Young Readers Group, First Book, and Nestlé’s Wonka™ brand were on hand to help celebrate this important milestone. Luke Kelly, grandson of Roald Dahl, and Managing Director of the Roald Dahl literary estate, spoke at the event, as did First Book representatives, who celebrated the fact that to date they have donated over 115 million books to schools in need. Dylan Lauren spoke about how her love for CHARLIE AND THE CHOCOLATE FACTORY inspired her to start Dylan’s Candy Bar and Nestlé representatives unveiled their latest innovation, WONKA™ Peel-a-Pops™ frozen treats (more information below). Also on hand were Joseph Schindelman, the original illustrator of CHARLIE AND THE CHOCOLATE FACTORY, Don Weisberg, President of Penguin Young Readers Group, and Chandler Arnold, COO of First Book.

WONKA, maker of the world’s most imaginative treats, is proud to announce its latest innovation: WONKA™ Peel-a-Pops™ frozen treats. The whimsical dessert pops look like and peel like bananas – but, in true WONKA form, the peels are deliciously edible.

Arriving in freezer aisles nationwide this spring, the dessert pops are available in two delicious flavors, Vanilla Banana and Vanilla Grape. With an edible and peelable outer layer and delicious vanilla center, Peel-a-Pops are like two desserts in one. For kids, or the kid in all of us, Peel-a-Pops frozen snacks are as fun to peel as they are to eat. And, at only 70 calories per pop, it’s a treat you can feel good about eating. WONKA Peel-a-Pops frozen treats will begin shipping in mid-April and will be available nationwide at Wal-Mart, Target, Safeway and Kroger at a suggested retail price of $4.29 per 8-count carton.

The is the book for super-fans of CHARLIE AND THE CHOCOLATE FACTORY and Roald Dahl, exploring the unique appeal of the story and its characters, its social history, the varying film and stage adaptations, and its ongoing cultural impact. With never-before-seen material from the archives, bonus content, and quotes from famous Roald Dahl enthusiasts, this will be the perfect book for fans of Charlie, Wonka, and Roald Dahl!

This award, named for the teacher in Dahl’s Matilda, will be administered by the American Association of School Librarians. The award will be sponsored by Penguin Young Readers for its first five years and will go to an AASL member librarian who has collaborated with a teacher on a project, event, or program to further social justice using school library resources. The 2014 award winner – who, for this inaugural award, must incorporate Charlie into the project – will be honored on June 28 at the ALA annual conference in Las Vegas.

The penguin truck will visit bookstores and festivals around the country througout the year. Highlights will include stops at the Los Angeles Times Festival of Books, The Steinbeck Festival, Book Expo America, The Nantucket Festival and The Decatur Book Festival, with more stops to come. The truck will include Charlie signage, sweepstakes entry forms, candy giveaways and more.

Penguin Young Readers Group is working with stores and libraries across the country to help them organize whipple-scrumptious Charlie and the Chocolate Factory birthday parties. They will be offering oversized standees of Charlie and Willy Wonka available for accounts and libraries in August and Charlie Trivia Kits

Luke Kelly, who helped to kick off the events in New York City yesterday, says: “As children we all dreamed of glorious chocolate filled adventures, and now—fifty years on from the publishing of my grandfather’s original, incredible and darkly hilarious tale—that dream can become a reality for five lucky children! I absolutely squirm with jealousy.”

“Much like Charlie, kids from low-income families can rise to their full potential with access to resources and opportunities,” said Kyle Zimmer, president and CEO of First Book. “First Book is thrilled to join Penguin Young Readers Group in this anniversary celebration that will put new books into the hands of kids in need.”

Dylan Lauren, Founder and CEO of Dylan’s Candy Bar added: “When I was a kid, I dreamed of winning a golden ticket to Willy Wonka’s chocolate factory. Now I get to make that dream come true for five lucky children!”

Roald Dahl (1916-1990) was born in Wales of Norwegian parents. After establishing himself as a writer for adults, Roald Dahl began writing children’s stories in 1960 while living in England with his family. His first stories were written as entertainment for his own children, to whom many of his books are dedicated. With more than 40 million Roald Dahl books in print in the US alone, Dahl is considered one of the most beloved storytellers of our time. Although he passed away in 1990, his popularity continues to increase as his fantastic novels, including James and the Giant Peach, Matilda, The BFG, and Charlie and the Chocolate Factory, delight an evergrowing legion of fans.

First Book is a nonprofit social enterprise that has distributed more than 110 million books and educational resources to programs and schools serving children from low-income families throughout the United States and Canada. By making new, high-quality books available on an ongoing basis, First Book is transforming the lives of children in need and elevating the quality of education. For more information, please visit us online or follow our latest news on Facebook and Twitter.

Dylan’s Candy Bar was founded in 2001 by Dylan Lauren with a mission to awaken the creative spirit and inner child in everyone. Renown for merging the worlds of art, fashion and pop culture with candy, Dylan’s Candy Bar is a pioneer in changing the way we see candy. As the largest state-of-the-art sweets emporium and candy lifestyle brand, Dylan’s Candy Bar is not your average “candy store.” The modern day candy land is home to over 7,000 candies from around the world, making it the most popular destination for the ultimate sugar rush experience.

This article, Roald Dahl’s CHARLIE AND THE CHOCOLATE FACTORY Celebrates 50 Whipple-Scrumptious Years in 2014, is syndicated from PRWeb and is posted here with permission.
Related Itemscharlie and the chocolate factorygolden ticket